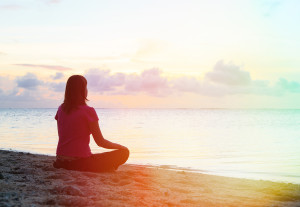 It was Sunday morning and I was supposed to be praying with team members before church. I was there in body only; my mind was on Housewives of Atlanta. At the time, it was a new show and I had just finished binge-watching season 1. I stood in prayer and thought, “I can’t believe that NeNe said that!” And then I felt convicted. I was supposed to be praying, and my mind was on the Housewives. I stopped watching the show because I realized that I was using TV to escape.

When our eyes are constantly on entertainment and social media we can easily be lost in a world that doesn’t even exist. We are immeasurably influenced by what we see. Looking back on my teens and early twenties I am astonished at how much I allowed pop culture to influence my life. I loved music videos and I started to aspire to be like the people in the videos, whether I wanted to admit it or not. I wanted to be the girl who didn’t care what anybody thought, and did whatever she wanted. I wanted to be pretty girl that stole the spotlight when she entered the party. Then I wanted to be the person throwing the exorbitant parties. I did not simply “grow out” of this; my aspirations changed because my eyes were soon on something and Someone else.

When I rededicated my life to God, one of the first verses I learned was 1 Corinthians 3:18 But we all, with unveiled face, beholding as in a mirror the glory of the Lord, are being transformed into the same image from glory to glory, just as by the Spirit of the Lord. Let’s break this down a little:

How can I see God? Soon after learning 1 Corinthians 13:8, I was I taught James 1:23 For if anyone is a hearer of the word and not a doer, he is like a man observing his natural face in a mirror. The word of God, and Jesus are one according to John 1:1;14. Therefore as I read the Bible I see God! James 1:23 says that the word is like mirror, which means that when I read the word I can see the parts of me that look my Father and the parts of me that don’t. I then get to choose what I am going to do with what I see. Am I going to pretend I don’t see character issues, cyclical patterns, or wounds. Or I am going to submit to God, sit in my Father’s presence, and allow Him to transform me as I choose to keep my eyes on him.

We are to behold God and His word continually as our mirror. Interestingly, anything that we look at long enough becomes a mirror, because as we constantly look at something or someone we inevitably, even if subconsciously, choose whether or not we want to mirror their actions. Thus, we choose to keep our eyes on God and His word. The more I am transformed by Him, the more I am light and the more I love like He loves. God’s loving-kindness brings us to repentance and into relationship with Him. Therefore I want His loving-kindness flowing in and through me so that I can lead my family, friends, and anyone I know to Him.